If at first you don’t succeed, try 110 more times. 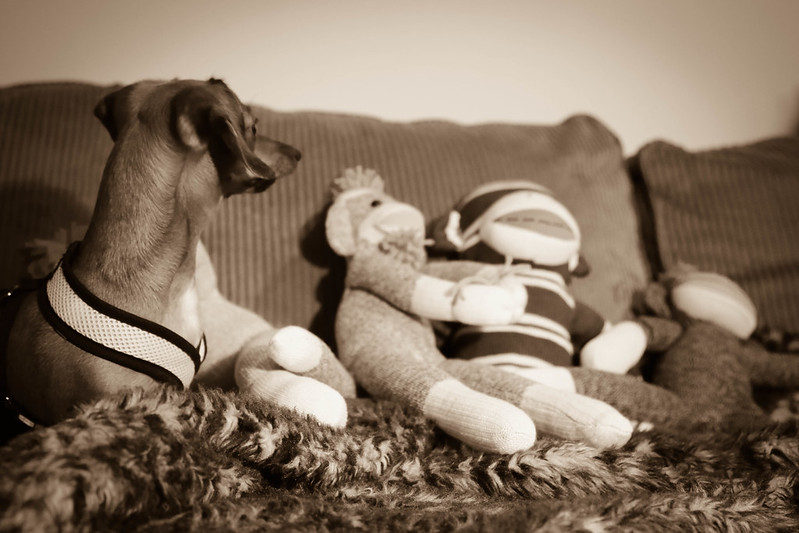 Today’s dog challenge was “too much is not enough.” I thought about photographing Lucy Peanut with her toys because she does have way too many. Then I got the idea of photographing her with my toys. I have a set of sock monkeys that I keep in a plastic container safely out of LP’s reach. They are the remains of a once and future photo project. Risky business, giving them to a puppy. I was afraid she would rip them to shreds before I could take a single shot. I knew that she was unlikely to sit still enough for a good shot, but I still lived in hope. I put the sock monkey’s on the couch, and Lucy Peanut followed. She was so excited. She went after first one and then another. I took 111 photos, and the one shown here is the closest I could get to something decent. She did not sit still for more than a fraction of a second at a time.

Yes, yes, I do know that I could have increased the shutter speed to try to capture her in action, but I didn’t want to do that because I was in a fairly low light situation, and I would have had to have kicked the ISO way up to increase the shutter speed, which would have meant grainy pictures, so I didn’t go with that option.

This is my example of why I am not a professional photographer. It is also my example of how I end up taking some nice shots anyway sometimes. I try and try and try. That’s the whole story.

Sometimes it works out, and sometimes it doesn’t. Sometimes I change my whole plan and take a another 111 shots.

Today, I did not get what I wanted, but I decided I would have to make the most of it, and that’s okay too.

My other shots for today: 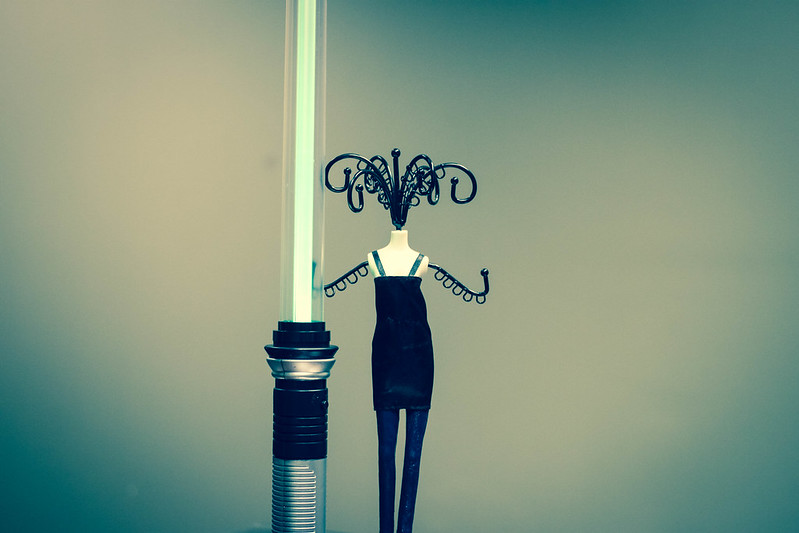 This was taken in my office. I used a sticky strip to make the light saber stand up, and I set Alice beside it. This shot serves no purpose except to amuse me, and I’ve decided that my own amusement is an important goal for my photography. 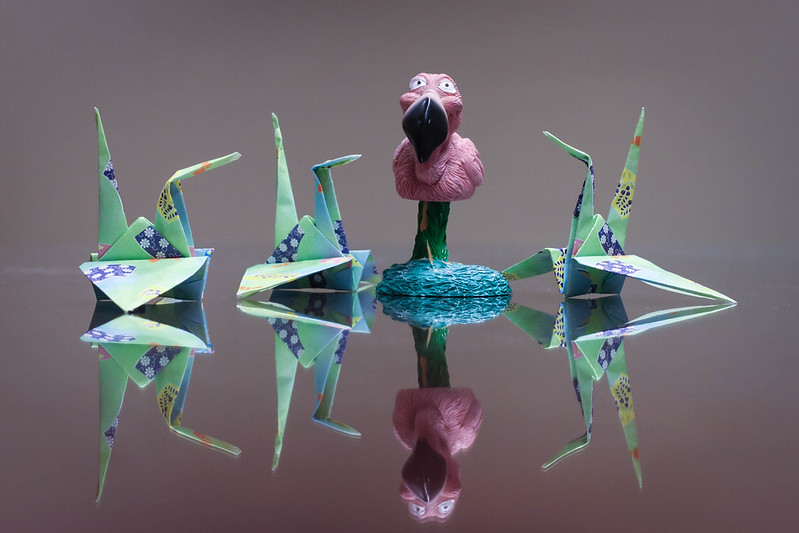 This was also taken in my office. I worked on school stuff until about 3:00, and then I used my office for a playroom. I folded my three paper cranes for the day and paired them with a little flamingo bobble-head. One should always keep bobble-heads in the office for just such an occasion.

Because I’ve just moved to a new office, my desk is clean. It is a big wooden desk that has a glass covering across the top. The glass created the reflection.

This is why I love photography. I don’t always know what I’m going to get until I start playing around with it. I didn’t see the reflection until I looked at the scene through the viewfinder. Once I did that, I knew that I was entering a little magical make-believe world that I had somehow created right there on my desk. These little magical worlds are everywhere, but we don’t see them until we start trying to capture them.

Lesson of the day:

If at first you don’t succeed, try 110 more times. Once you get it right, no one will know how many failures you left in your wake.